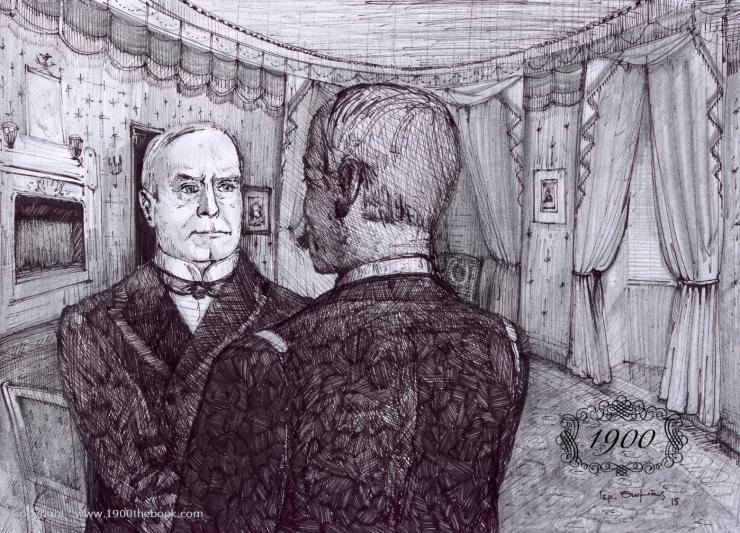 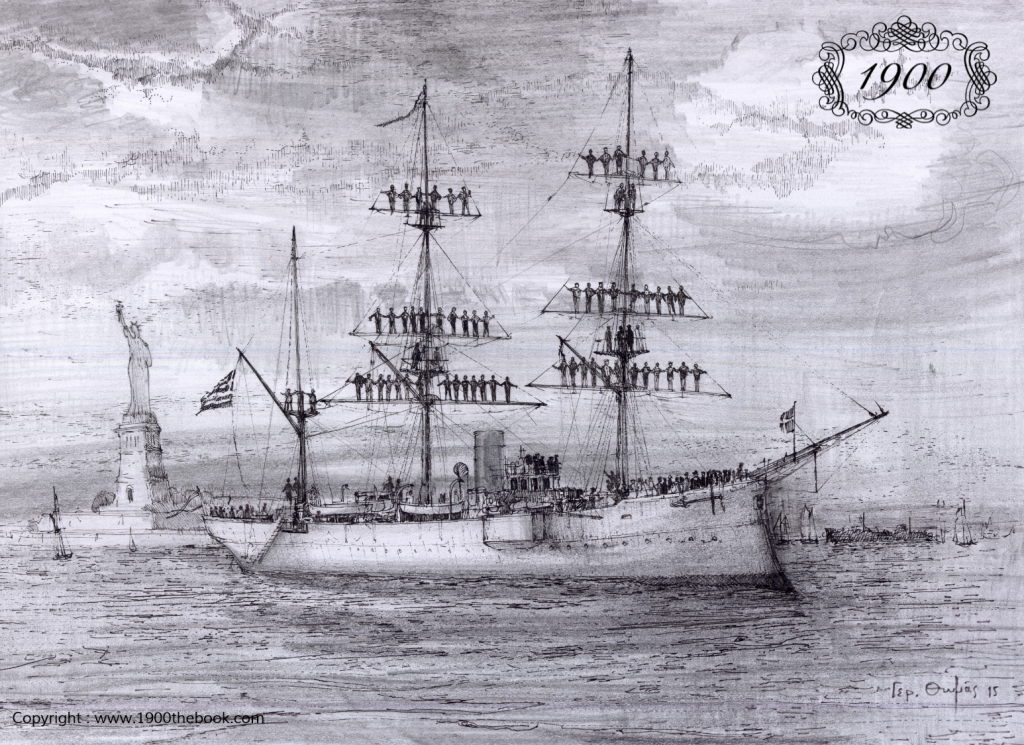 She crossed the Atlantic Ocean and brought the flag of the Hellenic Navy to the New World for the very first time.This story brings to light the crossing in 1900 of the Atlantic Ocean by a generation of men of the Hellenic Navy, an attempt which from the outset had seemed doomed to fail. Even though they suffered terrible misfortune and endured great hardship, they remained steadfastedly focused on their mission and achieved what would have been extremely difficult even for mighty naval powers of the time ,thus showing the rest of the world the seamanship of the Greek nation whose very soul is bound to the sea.Two hundred and fifteen strong, most of them islanders, people who previously had been complete strangers as they had never before formed the permanent crew of any ship, came together to pull off the first naval feat since the foundation of the Modern Greek State. Their orders were to present the flag of the Hellenic Navy to the 60.000 Greeks living in the U.S. but also to be the first exploratory mission of Free Greece. On their voyage they faced the elements, were battered by cyclones and low pressure systems, battled sea currents, chanced upon Triton, Nautilus and the Argonauts and even had a close encounter with sharks, adventures one only reads about in tales of fiction. Such was the daily experience not of imaginary, non-existent characters but of real men who went on to distinguish themselves in whatever they did, either fighting as war heroes at the front in the Balkan Wars or assuming high-level positions in the Navy and the State apparatus. For many of the travellers this journey would exert a tremendous influence on the path they were to follow later on in life.

The voyage of “Miaoulis” to America broke all the records set since the establishment of the Modern Greek State. A single ship, the masted cruiser “Navarchos Miaoulis”, representing one people, one State and one Nation, with the wind in her sails, crossed the Atlantic Ocean and brought the flag of the Hellenic Navy to the New World for the first time. It is worth mentioning that the first passenger ship to follow a similar trajectory on a scheduled route seven years after “Miaoulis”, belonging to a Greek shipping company and bearing the Greek flag , was the oceanliner Moraitis that departed from the Port of Pireaus on June 23rd 1907 bound for America. For Moraitis however to perform its scheduled operations, many events had to first take place, the most important being the voyage of “Miaoulis”.
One realizes how difficult the attempted passage of “Miaoulis” to America must have been by the large number of newspaper articles that were published about it at the time. In just 5 months hundreds of articles concerning the voyage appeared in Greek newspapers and around 60 in American newspapers. All the members of the Greek diaspora in America, men ,women, children, even old people ,wanted to visit the Greek masted cruiser that had sailed across the Atlantic Ocean. Americans exhibited the same feverish enthusiasm. Letters and telegrams arrived from all over America in which people asked the Commanding officer of the ship to sign autographs, send them pieces of the white and blue decorative bunting , photographs of the ship and other mementos. The mere presence of “Miaoulis” in America brought back fond memories and instilled in the Greeks living in America an immense sense of pride. As the flag on the mast fluttered in the breeze it became the Greek sky and the ship deck became a small part of their homeland. The newspaper Atlantis welcomed the ship to America with an article bearing the title Courage, Hope and Hard Work meaning . 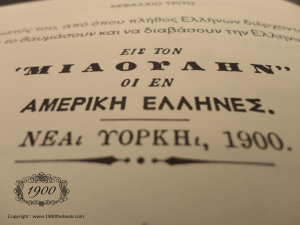 You have been rewarded for your courage, hope and hard work. Behold! Greece itself now stands before you, it has crossed the Atlantic Ocean and has come to meet us. The visit to “Miaoulis” was not a mere formality, it was more of a pious pilgrimage and the visitors cried tears of joy. Just the sound of the Commanding Officer’s name (who had not yet accomplished the heroic deeds he was to become even more famous for in the Balkan Wars which would soon break out) sent shivers down their spine because his name reminded them of the Greek Revolution and the War of Independence.
A sea of visitors, both Greeks and other Americans, came to visit “Miaoulis”. Eyes became watery, tears were shed, people held the crew members in a long embrace, the interior of the ship overflowed with flower bouquets and prize cups, telegram wires buzzed with the news of the arrival of the ship and wherever there were Greeks in America their hearts sang out and chanted “Miaoulis” has come!
The exact same sentiment prompted William McKinley , the President of the United States to invite Commanding Officer Pavlos Kountouriotis to the White House. 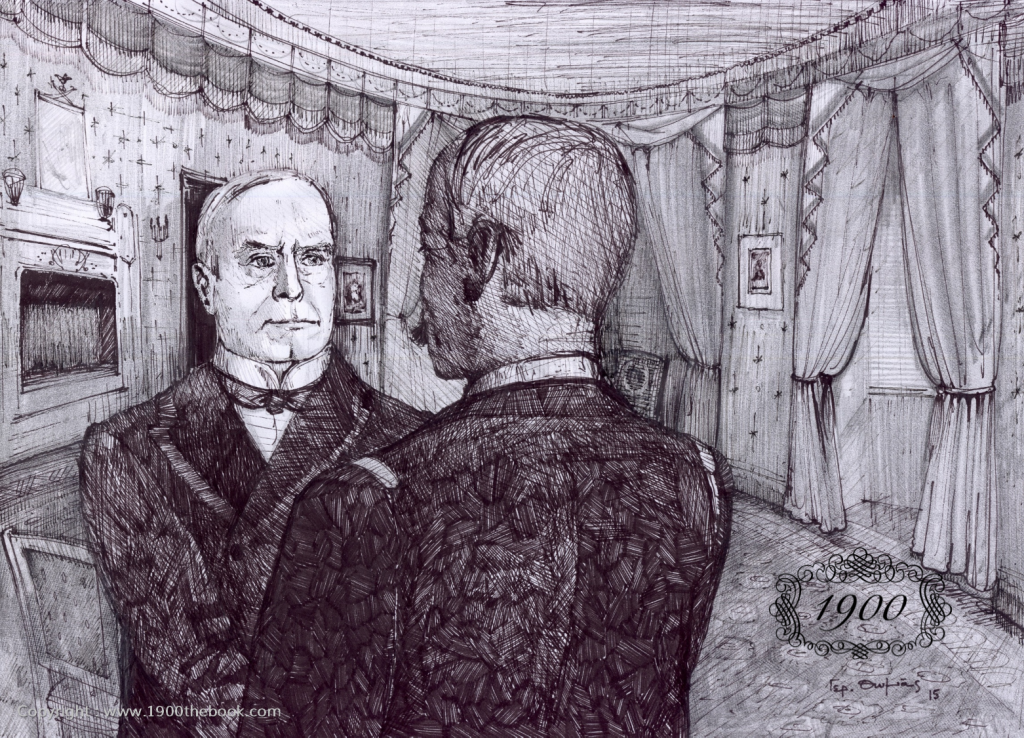 It was a one-of –a kind, extraordinary meeting that was surely not a formal procedure dictated by protocol. It was an act of friendship, a gesture showing the respect and appreciation of the U.S. President towards Greek seamanship but also recognition of a unique accomplishment. The President did not make a habit of receiving all Commanding Officers of naval ships reaching the shores of America at the White House, he only asked to see the Greek Commanding Officer! Public opinion worldwide was truly amazed by the remarkable abilities of the men serving in the Hellenic Navy because of the actions of just one ship, the “Miaoulis”. Only Mighty Naval Powers like England, France and even America had been held in such high esteem before. Now Greece, a small country, took its place alongside them and was considered a country of naval prowess. All this happened thanks to what was achieved by just one ship. Even the inventor Thomas Edison who discovered electricity came to pay tribute to the Greek naval officers who had succeeded in crossing the ocean.
Isn’t all this solid , ultimate proof of a great naval achievement?

Nevertheless, the mission of “Miaoulis” was not just to establish contact with the Greek diaspora, explore the sea, record its findings and present the flag of the Hellenic Navy. It also became a training ship for the officers and crew of the Hellenic Navy as it had sailed across the ocean, something which up until then had been the exclusive prerogative of ships of the Hellenic Merchant Marine.